Putrajaya is the new Administrative Centre of the Federal Government of Malaysia taking the capital city away from Kuala Lumpur(population 1.8mn), leaving Kuala Lumpur as the country's financial and commercial capital. Moving the national administrative machinery from Kuala Lumpur to Putrajaya is in line with the Government's policy to provide a more balanced development away from Kuala Lumpur. It is a decision motivated by life in Kuala Lumpur and ensure continued growth in the Klang Valley. However, Kuala Lumpur still serves as Malaysia's national and legislative capital.
The city is located at 2°55' North, 101°40' East (2.91667, 101.667).Situated along the South Growth Corridor within the Multimedia Super Corridor (MSC), the development of Putrajaya marks a new chapter in the history of modern city planning in Malaysia. It is set to be a model garden city with sophisticated information network base on multimedia technologies. Termed as Malaysia's first Intelligent Garden City, Putrajaya will become a vital development catalyst due to the role it will assume as a model city - as the nerve centre of the nation and an ideal place to live, work, conduct business and engage in sports and recreational activities.
The city is named after the first Malaysian Prime Minister, Tunku Abdul Rahman Putra. "Putra" also means prince in Bahasa Melayu while "Jaya" means excellent or success. The city has only been raised recently and it is still undergoing massive development.
To the west is Cyberjaya, a cyber city, also located within the Multimedia Super Corridor. 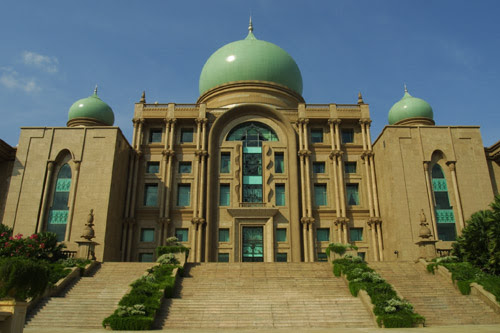 HistoryPutrajaya was founded on October 19, 1995 and is located in the middle of the Multimedia Super Corridor (MSC). Putrajaya is the third Federal Territory of Malaysia; the other two being Kuala Lumpur and Labuan.
The land on which Putrajaya now stands was formerly known as Prang Besar, part of the state ofSelangor. The Federal government negotiated with the state on the prospect of another Federal Territory and in the mid-1990s, the Federal government paid a substantial amount of money to Selangor for approximately 11 320 acres (46 km²) of land. As a result of this land purchase, Selangor now completely surrounds two Federal Territories within its borders, namely Kuala Lumpur and Putrajaya.
In 2002, a high speed rail link called KLIA Transit was opened, linking Kuala Lumpur and the Kuala Lumpur International Airport in Sepang, Selangor to Putrajaya. Construction of a monorail system is also underway.
More information about PUTRAJAYA